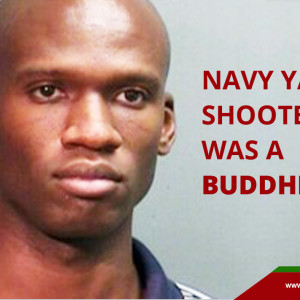 Joshua Eaton is a journalist covering religion and politics, international human rights, and social movements. Currently interim editor-in-chief of Spare Change News, he is the former co-editor-in-chief of Cult/ure: The Graduate Journal of Harvard Divinity School, where he earned an MDiv. His work has appeared at Al Jazeera America, Al Jazeera English, Huffington Post, Global Post, Buddhadharma, Tricycle, Tikkun and other publications.

When I heard that Aaron Alexis, the man who killed twelve people and wounded fourteen others in a mass shooting at the Washington Navy Yard on Monday, was a Buddhist, I did not worry that someone would blame my religion for his terrible crime. That was ensured by Buddhism’s popular image as a peaceful, non-dogmatic science of the mind—an image bolstered by internationally known figures like the Dalai Lama and Thich Nhat Hahn. Instead, I had the opposite concern: that people would say Alexis was not really a Buddhist.

That probably sounds strange. After all, we naturally want to distance ourselves and our communities from people who do such awful things. This is completely understandable, and it often springs from our noblest impulses—solidarity with victims of tragedy, anger at the perpetrator, and an inability to comprehend such a heinous act. Distancing ourselves from the shooter is a way of saying whom we stand with.

The case for excommunication is even stronger with Alexis. Nonviolence is one of the core tenets of Buddhism. The Dalai Lama has spent over fifty years fighting the Chinese government with nothing but the moral force of his convictions, and Buddhist monastics in both Tibet and Vietnam chose to burn themselves alive in protest rather than take up arms against their oppressors. In fact, the promise not to kill another living being is the first of five precepts enjoined on all Buddhists. (The other four are to refrain from stealing, lying, sexual misconduct and intoxication.) If someone cannot even keep the precept not to kill then what business do they have calling themselves a Buddhist?

Notice how different things are for our Muslim neighbors. In the popular imagination, Buddhism is a religion of peace and Islam is one of war. We may wonder how a Buddhist could commit such an atrocity—despite Buddhism’s history of violence in places like Burma, Japan, Tibet and Sri Lanka [see: Monks With Guns: Discovering Buddhist Violence, by Michael Jerryson in RD]. However, when the perpetrator is a Muslim we assume, as a matter of course, that religion was their primary motivation—despite the verses in the Qur’an that say murdering a single innocent person is the same as murdering all of humanity.

Of course, there is nothing to indicate that Alexis’ rampage had anything to do with his Buddhist practice. But even people who do commit atrocities in Buddhism’s name—the anti-Muslim monk Ashin Wirathu in Burma, whom Time magazine called “the face of Buddhist terror,” may be the most famous example—often get the same treatment. Buddhists do not commit violence, it seems, therefore no one who commits violence can be a Buddhist.

The different ways we respond to violence perpetrated by Buddhists and by Muslims are based on seeing people as religious stereotypes rather than human beings. The effects on Muslims in the United States are obvious and profound. They face discrimination, hate crimes, intrusive government surveillance and the daily threat of violence. Mosques are burned to the ground. Hard-working immigrants are denied jobs. Women are assaulted on the street.

The effects for converts to Buddhism are far more subtle, but they can be just as dangerous. I know someone with a history of mental illness who decided to stop her medication in the middle of a meditation retreat because she thought a “real” Buddhist shouldn’t need it. A few days later, she had to be hospitalized after attempting suicide. I’ve also seen many instances where women’s charges of sexual assault against a prominent Buddhist teacher were played down as a simple misunderstanding or a relationship gone awry. The teachers were obviously serious about their Buddhist practice, after all, and no real Buddhist would do anything predatory or criminal. Or so the thinking tends to go.

My friend and colleague Rev. Jennifer Channin, a Unitarian-Universalist minister, put it better than I ever could when we talked about the D.C. shootings. “People are not part of a religion because they already embody its principles and ideals,” she explained, “They are part of it because, in some way, they strive to do so. And often, they fail.”

There’s no doubt that Aaron Alexis failed to live up to Buddhism’s principles and ideals, just as the Tsarnaev brothers and Malik Hasan failed to live up to Islam’s. That does not make Alexis a fake Buddhist any more than it makes every Muslim a real terrorist. It makes us all—Buddhist and Muslim, Christian and atheist—human beings, with all the beauty and ugliness that entails.