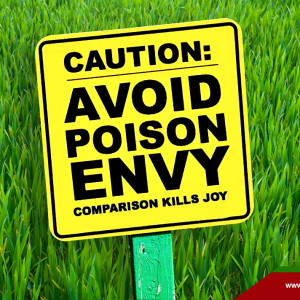 The vice of jealousy is one of the fatal illnesses of ethics that can be destructive to its beholder in both his life and the after-life. The difference between jealousy and envy is that jealousy involves a man desiring that a blessing be removed from his brother though he knows that such blessing is befitting for him. On the other hand, envy is to desire the blessing possessed by others without a wish that the blessing go away from others. In other words, an envious person does not want the halt of the progress of others but makes effort to equal others.

In the Holy Quran, feelings of envy and its consequences are addressed numerous times. It is absolutely thought-provoking that the main reason of the first trial of creation which happened between Prophet Adam (AS) and Satan which led to dissension of the Prophet to earth was due to jealousy and envy of Satan to Adam. Furthermore, the first murder of humankind which occurred between Prophet Adam’s two sons Habeel and Qabeel was due to envy. The Quran also mentions the story of Prophet Yusuf and dedicated a whole chapter to narrate his story which is cited as “the best of stories” according to Allah (SWT) due to its richness in lessons of morality and ethics. Prophet Yusuf (AS) was thrown into the well by his elder brothers after the feeling of jealousy increased in their hearts when they observed that Yusuf was specially loved by their father. However, Allah chose Yusuf and blessed him with prophethood and sovereignty. He made his brothers submit to him and got them under his sovereignty. Because of their jealousy to Yusuf, their trap worked against them and this is an obvious evidence of Allah’s wisdom and might.

The Prophet (SA) has advised, “Beware of envy because indeed envy destroys good deeds in the same manner as fire destroys wood.” (Ainul Hayat) In another hadith the Prophet (SA) narrates that Allah revealed to Musa, “O Son of ‘Imran! Do not envy what I have given from My Grace to others and do not look at it with a tempting eye because he who does not remain pleased with what I have distributed among my slaves and becomes envious of it does not remain happy, rather it comes in the way of the right distribution which I have made. Such a person is not Mine nor am I His.”

When the prayer “seek refuge with Allah from the mischief of the envious one as he practices envy” (which was revealed in Surat al-Falaq) is taken into consideration, it is better comprehended how serious the destruction the feeling of jealousy and envy can cause to society. It is important to note that the incidents told in the Quran, were experienced between brothers like that with the sons of Prophets Adam and Yaqoob. One cannot help but wonder if the feeling of jealousy can cause one to murder his brother, what else can it cause other people to do?

The vice of jealousy or envy is often experienced by people in petty and non-petty issues. However, the most serious and despised example of jealousy which the Quran alludes to is the jealousy of nonbelievers against the divine guides and their envy to the position of those personalities whom Allah (SWT) has chosen to deliver His message and guard it.

In fact according to interpretations of our Infallible Imams (AS), each of the examples we mentioned earlier was directly caused by envy and jealousy due to the divine selection of authority to the person who was being envied. For example, Iblees (LA) harbored feelings of envy when he recognized that Allah (SWT) have selected and chosen Prophet Muhammad (SA) and his purified progeny whose light was carried in the personality of Prophet Adam, hence he refused to prostrate to Adam. The cause of envy was not simply a matter of being created from clay versus being created from light. And when Qabeel received knowledge that Allah (SWT) has accepted the sacrifice of his brother Habeel over his and have chosen Abel for the successorship after his father Adam, the seeds of jealousy were planted in his heart as he was greedy for the guardianship to be transferred to him and his progeny. Along the same lines, the brothers of Prophet Yusuf (AS) became jealous of him when they learned that Allah (SWT) has chosen him for the successorship and guardianship after Prophet Yaqoob. They desired that honor for themselves and did not accept the divine selection in the matter of vicegerency.

It is also narrated that Qarun developed jealousy against Prophet Harun (AS). He said to Musa, “You took up Messengership and gave the successorship to Harun? No share for me even though I recite Torah better than both of you?” Prophet Musa (AS) answered, “By Allah! I did not give the successorship to Harun. Allah (SWT) gave it to him.” Qarun then said, “By Allah! I will never testify to it unless and until you give some evidence or argument.” Hearing this Prophet Musa gathered the chiefs of The Israelites and asked all of them to bring their staves. Musa placed all the staves during the night. Next day he ordered them to remove them. When they were brought out there was no change in any of them but the staff of the Harun had become green and leaves like the leaves of almond had sprouted from it. Prophet Musa then said, “O Qarun! Can you now understand that the distinction of Harun is God-given?

History repeats itself with almost all of the successors of the prophets and Imam Ali ibn Abi Taleb (AS) is no exception. The Prophet of Islam (SA) explains that “Allah created Prophet Adam (AS) from earth and Allah (SWT) selected me and my household and raised them above the entire creation and granted us authority over all. So He made me the messenger and appointed Ali Ibn Abi Talib as my Wasi (legatee). So I and my household have been selected and raised by Allah over the creation.” But unfortunately the Muslims who have given their pledge of allegiance to the successorship of Imam Ali at the event of Ghadeer Khum have turned on their backs and rejected the guardianship of Imam Ali due to envy of that honor which he received from Allah (SWT) and the Prophet (SA). Hence, Allah (SWT) said: (O Muhammad!) Your Lord knows all of that what they have hidden in their hearts. [16:74] The Prophet (SA) explains: The meaning is that He knows the enmity and jealously of the hypocrites against you and the Ahlul Bayt (AS).

The truth is that when Allah (SWT) commanded His Messenger to announce the Imamate and Wilayat of Ali (AS), the Prophet (SA) began to worry about the enmity of his community as he knew that Allah (SWT) had given Ali (AS) preference over all other companions and his worry was due to the countless virtues of Imam Ali which the people were envious of. He feared that people would not obey him in the matter of Caliphate, but Allah (SWT) promised and assured him protection from the people. Allah (SWT) has also addressed the issue of jealousy in the Quran when it comes to the great bounties He has bestowed to his chosen guides. “Or do they envy the people for what Allah has given them of His grace? But indeed We have given to Ibrahim’s children the Book and the wisdom, and We have given them a grand kingdom. So of them is he who believes in him, and of them is he who turns away from him, and hell is sufficient to burn. [4:54-55] Both Imam Baqir and Imam Sadiq (AS) narrate that the interpretation of this verse is “referring to us and that people envy us because Allah has reserved Imamate for us and has not given it to anyone else.”

In conclusion, the greatest injustice that a person can commit towards Allah (SWT) is to reject the Wilayah and guardianship of those whom He (SWT) selects, who are the Prophet and his AhlulBayt and Infallible Imams (AS). As believers we should be very careful not to ever experience at atom’s worth of jealousy towards the Prophet’s household or wish their positions. That’s why the Prophet (SA) advised us: “Do not go ahead of them, for you will be ruined. Do not fall behind them for you will also be ruined”. As the supplication of Nudba clearly points out, much of the injustices committed to the prophet’s family were due to buildup of “animosities related to Battles of Badr, Khaybar, and Hunain”. Such animosities are what manifested itself to a great degree in the most heinous acts of transgression in the history of mankind which took place in the plains of Karbala when Imam Husain, the grandson of the Prophet (SA) was brutally slaughtered along with his companions and family members in a massacre which has no like in the history of mankind. Unfortunately, these hostilities and animosities have carried out till this very day by the enemies of Islam who wear the Muslim garb but are filled with infidelity and corruptness from head to toe. Their extremist mentality is rooted in their animosity to the Haqq and its representatives as they know very well that the holy Prophet (SA) has countlessly emphasized that “Ali is with the truth and the truth is with Ali”. Their hostility and envy to the impeccable character of Imam Ali ibn Abi Taleb (AS) and his followers has translated itself to their continuous terrorist attacks we sadly observe today. May Allah (SWT) grant us complete surrender and submission to the Wilayat of the Prophet and his purified progeny and keep us steadfast on the Sirat Al Mustaqeem!