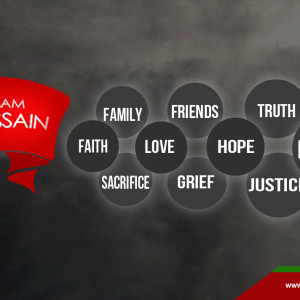 May the Peace and Blessings of God be upon you all.

With the onset of the month of Muharram, the Muslim community around the globe has begun mourning for the tragedies of Karbala, and the sacrifice of Imam Hussain. There is a spiritual light in the personality of the Imam Hussain which, for over a millennium, has been guiding the hearts of those who admire him. This is not only through the propagation of religious commandments, but is coupled with his noble character and moral compass which were entrusted with God’s words.

Imam Hussain can be the exemplar for any individual seeking a guide in his or her life. From compassion to selflessness, charity to self-restraint, just leadership to moral grounding, his persona is one that can be followed in all facets of daily life. Man, woman and child can learn from Imam Hussain the ways in which to uphold one’s self worth and dignity. His message in Karbala, which was a universal message for all mankind, upheld the idea of dignity and justice for society.

Stand With Dignity is a campaign to raise awareness about the state of our lives. What do we stand for? What values would we fight for? How often do we have compassion for others? These are questions we urge you to ask yourself. To stand with dignity is to understand mankind’s worth. While we want to encourage people to learn about Imam Hussain, our goal is to first promote reflection on his message.

When global atrocities occur, there is something that unites us all beyond race and creed; it is the human heart. It’s the element in us that cares when a murderer is seen as innocent, when a populous is yearning their rights, or even as child is being bullied. There is something intrinsic in us that yearn for justice; Imam Hussain is calling to that part of our hearts to move that feeling into action.

When we examine society on a whole, we then understand that for justice and civility to truly exist in the nation—the ummah—its members must individually decide to keep their moral compasses switched “on” at all times, as if there is no other option. Living by this just moral code, that which Islam propagates, should not be seen as a ‘good act’ but a ‘must act’: one that should be cultivated and nurtured in such a way that it becomes natural and innate. When the population en masse has internalized the teachings of Imam Hussain (as) and subsequently acted upon them, we then move closer to realizing the extended social goal of mankind establishing a civil society founded upon the teachings of justice and dignity, where each member recognizes his or her responsibilities and rights, beginning with the greatest right, the right of God to be worshipped singularly and sincerely.

We would like to humbly request our communities to help spread the word about the initiative, whether it is with your colleagues, your Twitter or Facebook accounts. We need your prayers and help to make this campaign successful.

The average cost of such billboards is about $6,000, so we kindly request your donations to help & support this project and educate/inform more people about Shia Islam. Please see below pictures from turnpike digital billboard campaign. The “Stand with Dignity” campaign will start Nov. 4 and end December 4. It is estimated some 2 million people each week will see or pass by the billboards.

With prayers for all,