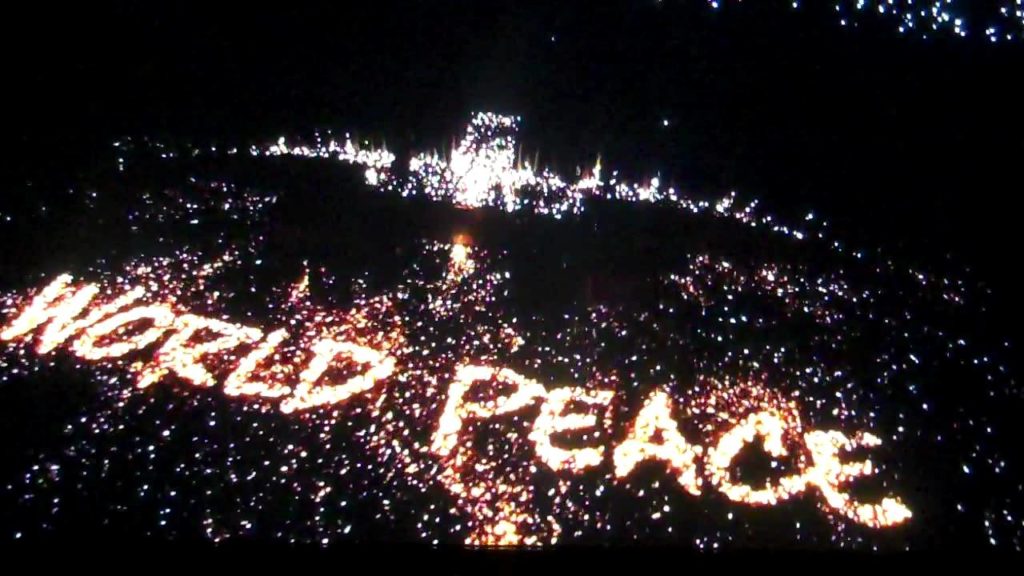 An innate characteristic of mankind is to pursue a state of peace and prosperity and to live a life filled with hope and security. Every human being is thirsty for peace and desires to live in a world that is free from violence, bloodshed, and aggression.  Yet often times we find examples of individuals or groups of people who counter this natural desire and instead bring about the opposite of peace and security.  They carry out acts of aggression and violence due to infected ideologies such as discrimination, prejudice, and bigotry.  When it comes to groups which carry out acts of terror against innocent human beings, the leader of such group carries a heavy responsibility on his shoulders for what his group members commit, in the name of whatever false ideology they believe in.  The reality is that there are many followers who follow the leader or ruler blindly and carry out grave actions without realizing the absurdity of what they are doing.

The scholars of religion and the religious clerics are no different than rulers as they have a level of authority among the people, hence their words and actions can have a great positive or negative effect over the people.  Religious clerics should also preach and promote the establishment of peace regardless of differences in creed, religious affiliation, school of thought, or any other theological difference.

In this era where radicalism and extremism has become widespread across religions thus leading to acts of terror in the name of religion, strong and wise leadership is ever more important.  Today we have an example of two prominent scholarly figures that represent the Islamic and Christian faiths respectively, Pope Francis Christian and Grand Ayatullah Sayyid al-Sistani.  We have an example of two grand leaders representing two different faiths who are both calling for peace and justice while forbidding violence and oppression. 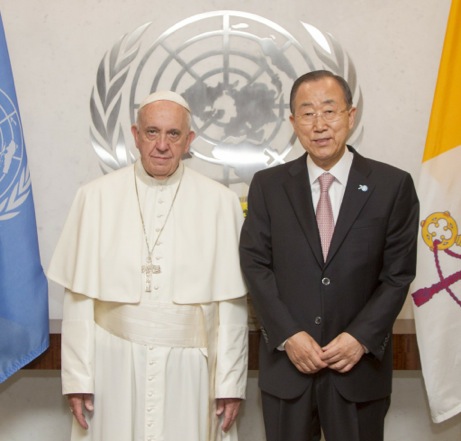 He is known for his call towards nonviolence and there are numerous statements he made in this regards.  In the Vatican Radio, he has said, “Today, more than ever, we need peace in this war which is everywhere in the world. Let us Pray for peace!” he said.

The World Day of Prayer for Peace, organized by the community of Sant’egidio, is part of an annual meeting of religious leaders of different faiths who come together to pray for peace and to discuss critical global issues of peace, unity, and interreligious dialogue.  During his catechesis before the recitation of the Angelus prayer, Pope Francis said that while worldliness is manifested in attitudes of corruption, deception and abuse of power that lead down the path of sin, a truly Christian lifestyle is “serious, but full of joy, committed to honesty, correctness, respect for others and for their dignity, and to the sense of duty.” Lamenting the widespread corruption that pervades our society, he pointed out that it is important “to decide which direction to take” and said that when we seek to follow the logic of the Gospel and of brotherhood, “we become artisans of justice and open horizons of hope for humanity.”

Calling on political and religious leaders, on the heads of international institutions, on business and media executives and on all men and women of goodwill to become instruments of reconciliation and adopt nonviolence as a style of politics for peace, Pope Francis remarked on the fact that we find ourselves “engaged in a horrifying world war fought peace-meal”, and that violence is clearly “not the cure for our broken world.”

Violence, he said, leads to forced migrations and enormous suffering, devastation of the environment, terrorism and organized crime. It leads to retaliation and a deadly cycle that end up benefiting only a few warlords.  Pope Francis said Christ’s message offers a radically positive approach. He himself walked the path of nonviolence and became an instrument of reconciliation. And citing historical figures like Mother Teresa, Mahatma Ghandi and Martin Luther King as models of nonviolent peacemakers, the Pope said nonviolence is more powerful than violence and it has produced impressive results. With respect to the terroristic acts done by ISIS and other extremist groups, Pope Francis states, “I emphatically reaffirm, he said, that no religion is terrorist and that the name of God cannot be used to justify violence”. 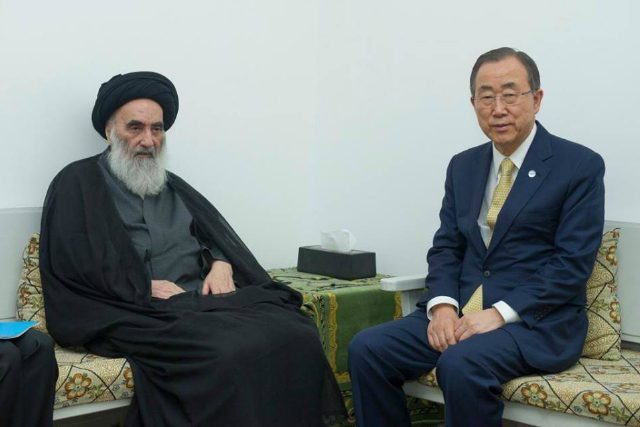 Al-Sayyid al-Sistani, commonly known as Ayatollah Sistani is a famous grand scholar and head of Islamic seminaries in Iraq who serves as one of the most prominent spiritual leader and senior cleric for Shia Muslims.  His Eminence is the first religious authority to be commended by the Security Council of the United Nations for his role in combating terrorism and his sponsorship of displaced Sunni Muslims, Christians, and other minorities who emigrated to Najaf and Karbala after the brutal assault of the terrorist gang ISIS. That commendation came in the Security Council report issued on January 10, 2014. His Eminence is also the first religious authority whom a Secretary-General of the United Nations visited in his residence to thank him and appreciate his efforts and positions against extremism and terror.

On July of 2014 the Secretary-General of the United Nations visited His Eminence Sayyid al-Sistani and spoke with him for about an hour. He expressed his appreciation of the position of Sayyid al-Sistani that calls for peace and preserving the unity of the country. He said, “I am extremely honored to have met Ayatollah Al-Sistani today for the first time. He is a man of the deepest wisdom and tolerance. He is an inspiration and a role model for his many followers in Iraq and beyond.” He added, “I expressed the United Nations’ gratitude for His Eminence’s support for all efforts to protect civilians in the current conflict. I expressed to His Eminence how deeply moved I was by his consistent calls for all sides to refrain from sectarian or ethnic rhetoric.” The Secretary-General Ban Ki-Moon ended his remarks by saying, “Once again, I was deeply impressed by my time with Him. You can continue to count on my full support along with the United Nations as the people of Najaf and all of Iraq work to build a tolerant, peaceful, and prosperous country for all its people.”

The efforts of Sayyid Sistani have further been noticed by the international public and a few has nominated him for the Nobel Peace Prize. Journalist Colin Freeman wrote a March 4 article for The Telegraph‘s blog titled, “Forget Obama and the EU. The man who should really have the Nobel Peace Prize is an obscure Iraqi cleric.” In it, he offered up several pieces of evidence to support his theory that this year’s Nobel Peace Prize should be given to Grand Ayatollah Ali al-Sistani, thus stirring a global campaign calling for Sistani’s nomination for the prize. This was not the first time that the idea has come up. In 2005, several parties, including specialists on Iraqi affairs and several Iraqi minorities, proposed this idea. The same year, New York Times columnist Thomas Friedman made the case for a Nobel for Sistani, writing, “If some kind of democracy takes root [in Iraq], it will also be due in large measure to the instincts and directives of the dominant Iraqi Shiite communal leader, Ayatollah Sistani.”

It is not surprising to see Sistani’s name come up for the prize, given his prominent role in deterring religious extremism, promoting forgiveness and peace and acting wisely during Iraq’s occupation and sectarian strife. His actions made him Iraq’s safety valve, and his absence in times of distress would have led to far worse humanitarian catastrophes in Iraq.

In the words of the Almighty Creator in the Holy Quran, “O my people! Give full measure and full weight in justice, and wrong not people in respect of their goods. And do not evil in the earth, causing corruption.” [11:85]