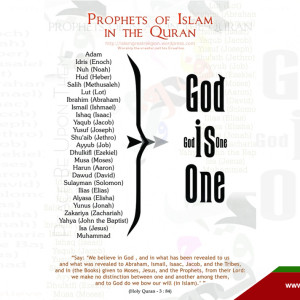 The Quran mentions twenty five prophets, most of whom are mentioned in the Bible as well. Who were these prophets? Where did they live? Who were they sent to? What are their names in the Quran and the Bible? And what are some of the miracles they performed? We will answer these simple questions.

Before we begin, we must understand two matters:

One of his great miracles was the Arc which he built on God’s command that rested on Mt. Judi which is said to be between the Syrian-Turkish border today near the city of Ayn Diwar.

He later returned with Lot to the south of Palestine, Ibrahim settling in Bir Sab’a and Lot settled close to the Dead Sea.

Abraham then moved his second wife, Hagar, to Mecca with his son Ishmael and left them there at God’s command. Mecca was a barren land and the well of zamzam was provided by God for their survival. The ancient tribe of Jurhum settled their due to zamzam. Abraham is said to be buried in Hebron, Palestine.

7, 8. Abraham had two sons: Ishaq or Issac and Ismael or Ishmael. Issac is mentioned 16 times in the Quran whereas Ishmael is mentioned 12 times. Issac lived with his father, Abraham, and died in Hebron, Palestine. God ordered Abraham to sacrifice Ishmael. He went to Mecca with his parents and was left there with his mother. Abraham visited Ishmael several times in Mecca, and during one of those times, God ordered Abraham and Ishmael to build the Ka’bah (the Holy House). Ishmael died in Mecca and was buried there. Issac is the fore-father of the Jews and Ishmael is the forefather of the Arabs.

18,19. Ilyas or Elijah and Yas’a are mentioned two times each in the Quran, they both lived in Baalbek.

20,21. Dawud or David is mentioned in the Quran 16 times. He led the Israelites in war and won, and had many miracles. His son, Suleiman or Solomon is mentioned 17 times and was also a king with great miracles. Both are buried in Jerusalem.

Five prophets were Arabs: Hud, Salih, Shuaib, Ismail, and Muhammad. Four of them were send to the Arabs, whereas Muhammad was send to all human beings.

In conclusion, prophets, biblical and non-biblical, are integral to the Islamic scripture. Muslims see themselves as the true inheritors of the mission of the prophets sent by God to humanity: worship of the One True God and obedience to Him.