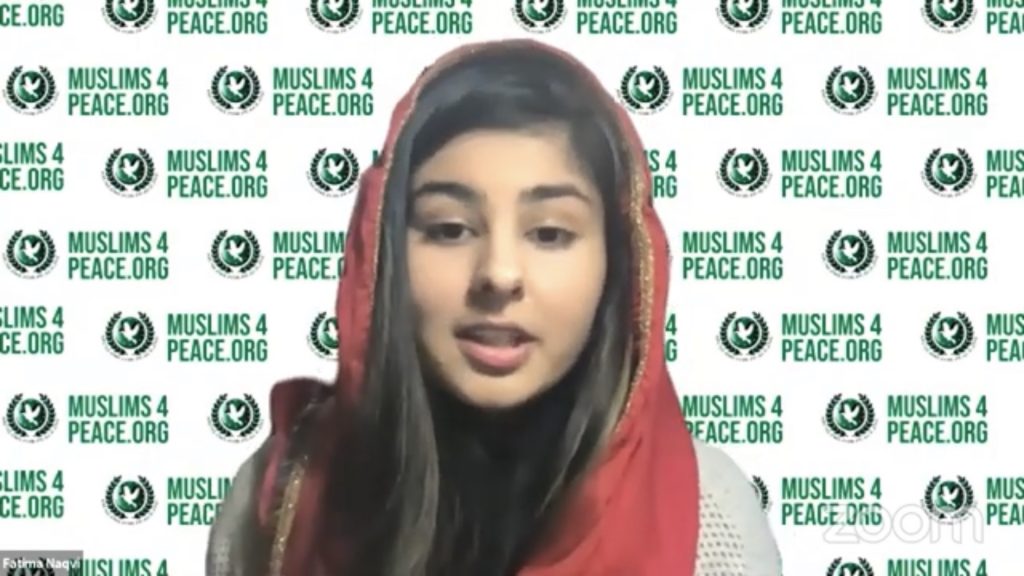 In celebration of the Islamic month of Ramadan, Muslim4Peace held on May 1, 2020 an inter faith Ramadhan Iftar for faith, peace and unity for all in a virtual format.
The program was kicked off by the recitation from the Holy Quran from Dr Walid Abushaba. He recited The verses of the Throne, that are famously recited by Muslims, which offers messages of light after darkness. Thereafter, Dr. Raza Mir introduced the event in perspective of current events. He also mentioned the work Muslims4peace is doing to assist others in the face of the Covid 19 pandemic such as funeral serves, helping disparate communities mourn, and offering assistance to those in need.

Thereafter, the first speaker to express his thoughts was Dr. Sajjad Rizvi who joined from the United Kingdom. An Associate professor at Exeter University who also tweets at mullasadra and runs a blog, spoke on the impact words have an on the soul and how mysticism works in differing faiths.

Mohammed Hammoud a private consultant, dedicated community leader and activist was the second speaker who spoke from London, Canada. He made a correlation between the life of Prophet Yahya, John the Baptist and the meaning of community today. He elaborated on its importance and continued to pose the valuable question as to how a community can come together today and unite while dealing with a crises and losing people. Ultimately, He challenged at looking at the common causes faiths have with one another. “This is an opportunity for us to look at the common ground and the shared vision of humanity in how we can live in unison and peace.”

Afterwards Rabbi Marc Kline joined the platform demonstrating the commonality of the Jewish faith with the Islamic faith when practicing some form of abstinence. He stated that as we establish our relationship with God, we also should not forgot about those who do not have. “Our job is to bring our light and God’s light into our relationships and into the work that we do to create an opportunity within us to refocus.”

The Governor’s Chief of Staff, Deborah Cornavaca than took the virtual platform She spoke upon the need to come together and unify with all the diversity that exists. Cornavaca said this entails offering an “invitation which is often missing.” Subsequently, she extended the state’s hand in support to all the diverse religious groups.

Next, Mr. Farooq Mitha, the Senior advisor for Muslim engagement on Joe Biden’s presidential campaign spoke about his role in working with the Muslim community along with the campaign in a partnership to elevate the voices of Muslims on issues that relate to them. He mentioned some of those issues such as discrimination and hate. He continued to elaborate on Biden’s efforts to connect with the people on a individual level as well.

A thoughtful speech was then delivered by Reverend John Shuck about the message of God, the current pandemic and the separation of communities by offering hope and truth. He affirmed that in Kerbala he witnessed what he believed to be “is the truth and power of Allah and hope; the hope for humanity.”

Soon after, Imam Hamad Chebli followed with a message of power, which is to promote the message of the Prophet that “we are one community.” And emphasized that all Abrahamic faiths are to be under the banner of One God.

Reverend Bob Moore when given the opportunity to speak mentioned the core items that we can turn to from faith traditions during the current crises. He stated one of them by relating a story. The conclusion was to love like God and love your neighbor. He asserted that “anything anyone ever needs to know is that there is a fellow human being in need and that’s when God says love your neighbor as yourself.” He said the exemplification of it is seen today through the healthcare workers who work selflessly during the pandemic.

Subsequently, Reverend Dr. Robin Tanner put in perspective the necessity in today’s times of being interconnected. She stated that during “these times it reminds us and calls forth that among each of us we are all essential and worthy.”

Congresswoman Bonnie Watson Coleman than graciously offered Ramadan greetings to the Muslim community and offered words of unity and support.

Lastly, Mansoor Rizvi than gave the closing remarks of unity and a reminder of why fasting was instilled, which is to gain God consciousness. Thus he extended that consciousness to outreach which becomes crucial to help those less fortunate throughout the year. He then ended with a prayer seeking for goodness in this world and the hereafter.