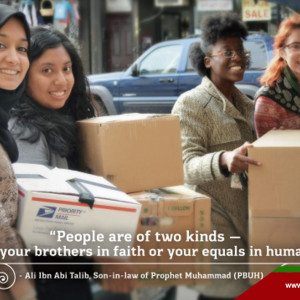 New York, New York – June 23rd, 2014 – Muslims for Peace, Inc. (MFP), a tri-state organization committed to bridging the gap between people of different religious and ethnic backgrounds through various interfaith initiatives, will be releasing advertisements today throughout Manhattan subway platforms as part of their #StopTheHate Campaign to counteract the recent rise of anti-Muslim hate in New York City and around the country.

The ad features members of the NYC Muslim community working with their fellow concerned citizens in Hurricane Sandy relief efforts. “We feel this ad shows the true image of Muslims actively and positively contributing to the American landscape. It draws specific attention to the great work American Muslim organizations did during and after the devastation of Hurricane Sandy. The support Muslim organizations provide to their respective communities everyday is something that needs to be highlighted, which we’re attempting to do with this ad as part of our #StopTheHate campaign,” said Fahad Hasnain, a Queens resident and #StopTheHate Campaign Director.

Hasan Ali, Board Member at MFP continued, “The quotation we use in the ad ‘People are of two kinds – either your brothers in faith or equals in humanity’ by Ali Ibn Abi Talib, the Prophet Muhammad’s son-in-law, conveys the spirit with which Muslims are called to live in every society, working hard not only for themselves but with their fellow citizens to help all those in need and in times of crisis, regardless of faith.”

Additionally, the ad was submitted to the MTA “under protest” due to a requirement to include a disclaimer that takes up 25% of the ad space. A letter from MFP to MTA President Carmen Bianco read in part, “The purpose of the ads that we are placing is to educate and promote understanding amongst communities, and they are fully protected by the First Amendment. The MTA may disagree with their message and it is, of course, free, as is government generally, to say that any speech on public property does not represent its views. While it may be true, as a court has held, that the anti-Muslim ads enjoy constitutional protection, the purpose of those ads is not to inform, but to demean and humiliate in order to make life less bearable for one of New York City’s religious communities. The MTA and the City should acknowledge the different purposes of these two sets of ads and their response should recognize that important difference.“