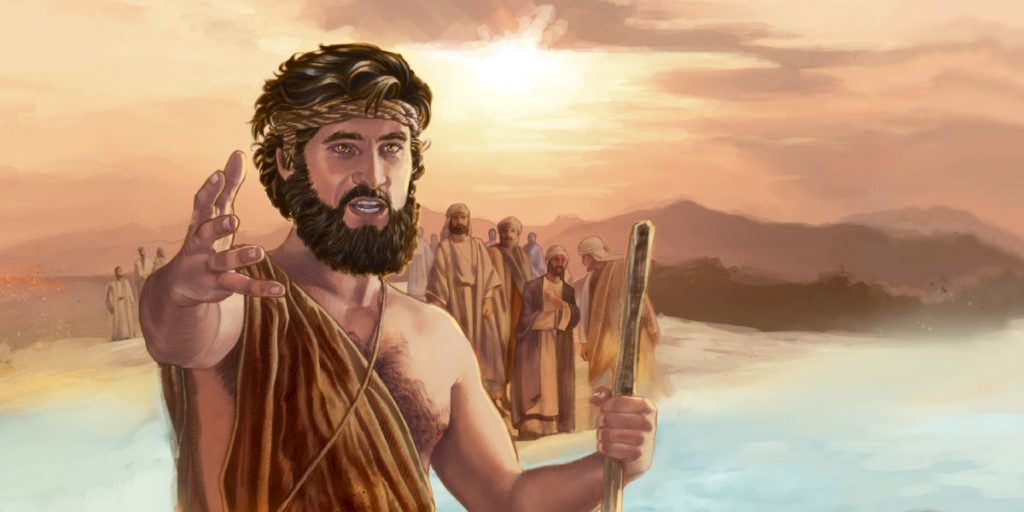 ‘O Yahya (John the Baptist), hold fast the Book.’ And We gave him wisdom while yet a child, And tenderness of heart from Ourself, and purity. and he was pious and dutiful toward his parents. And he was not haughty and rebellious.  And peace was on him the day he was born, and the day he died, and peace there will be on him the day he will be raised up to life again.  (Al Quran 19:13-16)

Truly I tell you, among those born of women there has not risen anyone greater than John the Baptist.  (Matthew 11:11)

Saint John the Baptist Day marks the birth of St John on June 24 each year. It is a public holiday in the autonomous community of Catalonia in Spain.

The Holy Quran paints a picture of John the Baptist, may peace be on him, entirely consistent with its theology but the same cannot be said about the account in the Gospels and the Christian theology.

Saint John the Baptist Day is a public holiday in the autonomous community of Catalonia on June 24. Public life is generally quiet. Most businesses and other organizations are closed. Most stores are closed but some bakers and food stores may be open. Public transport services generally run to a reduced schedule, although there may be no services in rural areas.

St John was a preacher and religious figure during Jesus’ lifetime, according to the Christian belief. Baptism rituals in the Jordan River were an important part of his ministry.

The Holy Quran presents him as a Jewish prophet among the chain of prophets and it is entirely consistent with the Quranic theology that there are no regions of the world, where prophets were not sent by God to guide mankind.

One obvious dilemma created by the person of John the Baptist is that a person of higher religious standing baptizes a person, who is junior to him.  So, if John the Baptist baptized Jesus, in spiritual realm he had a status higher than Jesus?  If this be true it takes away from the theory of Jesus, may peace be on him, being literal son of God!  We read in the Gospel of Matthew:

Jesus replied, ‘Let it be so now; it is proper for us to do this to fulfill all righteousness.’ Then John consented. (Matthew 3:13-15)

John the Baptist is baptizing Jesus, presumably taking a superior role and not declaring his faith in ‘son of God,’ who has come to ‘die for sins of humanity,’ including those of John the Baptist’s, if any, and his followers.  He continues with his ministry rather than yielding to the alleged son of God!

According to Encyclopedia Britannica, “All four Gospels recognize in John the start of the Christian Era, and each in its own way tries to reconcile John’s precedence in time and Jesus’ acceptance of his message and of a baptism of repentance from his hands (elements suggesting subordination to John), with the author’s belief in Jesus as Messiah and son of God.” [2]

The myth making of Gospel of Luke knows no bounds, even in his mother’s womb John recognizes Jesus—also still in his mother’s womb—as his Lord.[2][5]   Yet in the Gospel of Matthew we read that John the Baptist is not sure about the status of Jesus, just a few years before crucifixion and sends his followers to make queries:

When John, who was in prison, heard about the deeds of the Messiah, he sent his disciples to ask him, ‘Are you the one who is to come, or should we expect someone else?’

Jesus replied, ‘Go back and report to John what you hear and see:  The blind receive sight, the lame walk, those who have leprosy are cleansed, the deaf hear, the dead are raised, and the good news is proclaimed to the poor. Blessed is anyone who does not stumble on account of me.’

Truly I tell you, among those born of women there has not risen anyone greater than John the Baptist.  (Matthew 11:2-11)

John the Baptist does not get to hear the story about his grandeur as his followers had left before Jesus praised him, but Jesus’ followers are told that John the Baptist is the greatest of all.  Presumably he is greater than Jesus also as he was born of Mother Mary.

No reason is offered as to why John the Baptist is greater than the Prophet Abraham or the Prophet Moses, who are the Founding Fathers of Judaism, in their own right, even though centuries apart?

It is strange that according to St. Paul a new religion is being launched in Jesus dying for the sins of humanity, yet both Jesus and John the Baptist are living the lives of Jewish prophets and both are circumcised and continue to follow other Jewish ethics, according to the Gospels.[3][4]

According to St. Paul a new Covenant is being signed between God and His people but throughout the lifetime of Jesus, there is no mention of the new Covenant, he and his followers are practicing the old Jewish Covenant every day of the week, even as Jesus prays passionately to God the Father, for the bitter cup to be taken away from him.  He himself is circumcised and so is every one of his followers and the person who baptizes him, until St. Paul signs a new deal more than 20 years after crucifixion, to ease pagan’s conversion to Christianity.

So, much for a new Covenant!

The external sign of the old Covenant, which is circumcision, is being practiced universally, until decades after crucifixion or the new Covenant, in the new Christian communities and is still practiced by the Coptic Christians.

Interestingly, in reading the account of John the Baptist in the Gospels, we do find a mention of the Holy Prophet Muhammad, as ‘the Prophet.’  We read in the Gospel of John:

Now this was John’s testimony when the Jewish leaders in Jerusalem sent priests and Levites to ask him who he was. He did not fail to confess, but confessed freely, ‘I am not the Messiah.’

They asked him, ‘Then who are you? Are you Elijah?’

‘Are you the Prophet?’

Incidentally, here we have another of the contradictions in the Bible, as John the Baptist refuses to be Elijah, but, Jesus calls him the Elijah. (Matthew 11:13-15)

At any rate, what is of greater interest in this account of the first chapter of Gospel of John, is the expression, ‘the Prophet,’ which is separate from Elijah or the Messiah and can most fittingly be applied only to the Holy Prophet Muhammad, may peace be on him.

All the four canonical Gospels try to define and argue the relationship between John the Baptist and Jesus.  According to the Gospel of Mark and Matthew, John the Baptist is the Elijah.  But, how does the last of the four Gospels, Gospel of John, written 60 years after crucifixion tackles the issue at hand?  According to the Encyclopedia Britannica:

The Gospel according to John reduces the Baptist from an Elijah to a model Christian preacher, a mere voice; it omits any description of Jesus’ baptism. Its tendency has often been labelled polemic against a continuing group of disciples of John, but it is more plausibly explained by the evangelist’s desire that this ideal witness recognize the full character of the Christ as he is presented in the Gospel According to John and as a necessary consequence of the tension between the highly developed understanding of Christ in this Gospel and those details in early Christian tradition that suggested Jesus’ subordination to John.[2]

The biblical account about John the Baptist is contradictory at best.  But, the good news is that the Bible does tell us about ‘the Prophet,’ who did in the seventh century offer us resolution to all these and many other contradictions in the Bible.

On this holy day, let me extend an invitation to the two billion Christians that as we study the account of John the Baptist, in both the Holy Quran and the Holy Bible, as we celebrate his day, to try to compare and contrast the two theologies with the goal to find common themes.  Let me conclude in the words of the Holy Quran:

Say, ‘O People of the Book! come to a word equal between us and you — that we worship none but Allah, and that we associate no partner with Him, and that some of us take not others for Lords beside Allah.’ But if they turn away, then say, ‘Bear witness that we have submitted to God.’ (Al Quran 3:65)

There are two men in the history of mankind whose legendary stands of dignity had profound impact, inspiring centuries of commemoration and reverence. Those two men are:

Previous ArticleJoin Us For An Evening Of Laughter To Raise Money For A Great CauseNext ArticleMuslims4peace Vigil for Peace and religious freedom.