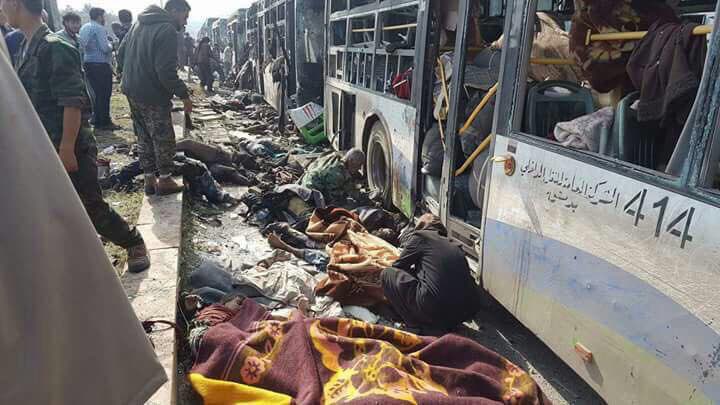 by Walaa Chahine
A recent college graduate diving head first into the world of journalism. My interests include TV, science, books, religion, politics, sports, and social media. My favorite thing in the world is the look of disdain people give me when I tell them I hate coffee.

Two days ago, buses carrying residents from the Syrian towns of Foua and Kfraya were attacked by a suicide bomber. They were part of an exchange that allowed Foua and Kfyara residents to flee their rebel-held towns and enter government territory. Out of the 126 people that were burned alive, 80 were children.

Although Al-Qaeda and ISIS have not claimed responsibility, they have targeted the residents of these towns before. The Syrian Observatory for Human Rights stated that these buses were specifically targeted, and past evidence suggests this is likely, especially because these were Shi’ite men, women, and children, coming from Shi’ite villages.

It is important to note that these victims were Shi’ite Muslims, not to divide Muslims, but to shine light on the targeted killing of this specific sect of Muslims. Unfortunately, mainstream media does not acknowledge these attacks as what they are, deliberate acts of murder against a minority group. It is taboo to bring up Shi’ite genocide, it’s taboo to acknowledge any killings of Shi’ite. Most media organizations, even AJ+, who has focused primarily on the war in Syria for several years, shied away from mentioning that these victims were Shi’ite, as if the distinction would somehow diminish the significance of this attack. It’s selective humanity.

Everyone from the top-paid journalists of news outlets to the activists on social media were very quick to acknowledge victims in Syria and demand change when the President of Syria, Bashar Al-Assad, was accused of gassing civilians. Donald Trump even bombed Syria as a response. Despite the fact that the Saturday’s bombing of the convoy created the largest number of casualties in Syria in over a year, the same kind of attention wasn’t given to these victims. To do so would be politically damaging.

In this dark game of chess the world is playing, Shi’ite Muslims are on the evil side. For some reason, the media thinks that highlighting the genocide of Shi’ite Muslims means that they are aligning themselves with Iran, and in doing so, aligning themselves with Bashar Al-Assad. They are letting the truth be swept under a rug; ignoring the targeted killing of millions in fear of political backlash.
Shi’ite Muslims in Syria aren’t the only ones ignored. In fact, nobody is more ignored than the people of Yemen. The uprising of Houthis, a Shi’ite led movement, is opposed by Saudi Arabia who has been dropping missiles on them for almost as long as Syria has been at war. Millions are suffering from poverty, more than 10,000 people have been killed, and hundreds of thousands have reached famine conditions. There is a humanitarian crisis in Yemen, but they don’t get the same attention from the media, lawmakers, or Trump because they are being attacked by Saudi Arabia, a US ally. Political fear strikes again.

The same can be said for the situation in Nigeria, where Shi’ites make up a very small of minority of the nation’s Muslims. Last year, hundreds of Shi’ites in the town of Zaria were burnt alive by soldiers and then dumped into mass graves. The leader of the Shi’ite Islamic movement of Nigeria, Sheikh Ibrahim El-ZakZaky, was brutally tortured and kidnapped last year by the Nigerian government, his fate unknown.

In Bahrain, the government continues to divide the Sunni and Shi’ite people by taking away the basic civil rights of its Shi’ite. Despite the fact that they make up more than 70% of Muslims in the country, Shi’ites have little political power in Bahrain. Recently, the government executed three Shi’ite men despite not having any evidence to back up the charges against them. Mass street protests followed in the nation. The country followed in the footsteps of Saudi Arabia, who was met with global condemnation when it executed a top Shi’ite cleric, Sheikh Nimr al-Nimr, along with 47 others.

To condemn such action by these nations is not political suicide, but basic humanitarian effort. Even if one wanted to understand the dynamics of ISIS in the Middle East, they would need to understand who ISIS’s main targets are. Since the early days of Al-Qaeda in Pakistan, the main targets of Islamic terrorists have been Shi’ite Muslims. While Al-Qaeda was targeting Shi’ites there, Saddam Hussein was killing Shi’ites in masses. Today, both the Shi’ites of Pakistan and Iraq are targeted by ISIS at mosques and schools at least one month. Ignoring this leaves out significant pieces that help us all understand the motives of Islamic terrorists.

It is important to keep in mind that highlighting Shi’ite genocide doesn’t mean Sunni victims are less significant. It is sad that any people have to die. However, those victims aren’t targeted for being Sunni, but much like Christians in MENA, Shi’ite Muslims are. Yet, the Eiffel Tower isn’t lit up when they die, Facebook flags aren’t updated, and there isn’t an emergency meeting of international leaders at the UN.
Shi’ite victims are ignored, whether they be from Syria, Pakistan, Yemen, Iraq, Nigeria, Bahrain, or Saudi Arabia. Their names are placed into a folder mainstream media is afraid to touch from fear of political burn, when in reality, Shi’ites are the ones being burned and forgotten. It’s time they were given a voice.