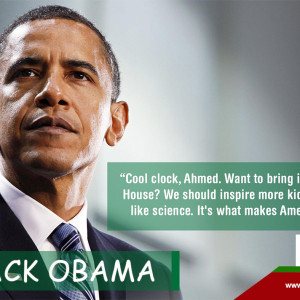 Support for Ahmed Mohamad, the 14 year-old Muslim boy who was arrested for bringing a clock that Texas police deemed suspicious, continues to grow, from famous politicians to technology giants.

On Friday, Muslims For Peace, a non-profit group based in New Jersey, also threw in its support for the 14 year-old inventor, who aspires to go to MIT.

“The creativity and ingenuity displayed by Ahmed Mohamad in his clock invention should have been met by teachers and school staff with a statement of congratulations and praise, not an arrest warrant and public humiliation,” he said. “We condemn the embarrassment this young man had to experience because of misplaced fears and stereotypes. The United States of America is a country of strong values that celebrates and encourages open-mindedness and innovative thinking. The fallout that resulted from the police and school’s unfortunate actions quickly yielded support from many people and companies who know that Ahmed Mohamad is simply a student who happens to be a Muslim who is aspiring, and working hard, to live the American Dream.”

The young student received an invitation to the White House.

Just hours after the #IStandWithAhmed social media campaign went viral, the student found himself quickly becoming a hero in the fight against Islamophobia.

“Cool clock, Ahmed. Want to bring it to the White House? We should inspire more kids like you to like science. It’s what makes America great,” tweeted Barack Obama, President of the United States of America.

The story of Mohamad, whose parents are originally from Sudan, revealed how he had ended up in handcuffs after building a homemade clock and taking it to school to impress his teachers. The young man, who had been dressed in a grey NASA t-shirt, was marched off to juvenile detention after being accused of building a ‘hoax bomb’ by police.

As an uproar brewed on social media, police in Irving, Texas, decided not to press charges and has yet to offer any public apology. The city’s police chief, Larry Boyd, told reporters that Mohamed was not “forthcoming,” refusing to give a more detailed description about the homemade clock.

Mohamad made a statement that was self-depricating, introductory, and revelatory.

“So I guess everyone knows I’m the person who built a clock and got into a lot of trouble for it,” they young boy said during a press conference, thanking his supporters. “I built a clock to impress my teacher, but when I show[ed] it to her, she thought it was a threat to her. So, it was really sad that she took the wrong impression of it.

“Since the charges have already been dropped, all I have to say is that I really want to go to MIT…I’m thinking of transferring schools…to any different schools,” said Ahmed who thanked his supporters for standing with him.

Curiously, no Republican politicians running for president, such as Sen. Ted Cruz, who is from Texas, expressed support for Mohamed.

“Having the skill and ambition to build something cool should lead to applause, not arrest. The future belongs to people like Ahmed,” said Zuckerberg in a post on Facebook.

“Ahmed, if you ever want to come by Facebook, I’d love to meet you. Keep building.”

While Ahmed has certainly found a plethora of support, the young inventor vowed to support other young people who find themselves in similar situations.

“Don’t let people change who you are,” he said at the press conference while addressing questions from supporters. “Even if you get consequences for it.”

#IStandWithAhmedahmedamerican muslimsfacwbookhillary clintonMark ZuckerbergPresident Obamascience and muslims
Previous Article10 Things I Wish Everyone Knew About RamadanNext ArticlePress Release : Why Muslims for Peace Serving at Risk and Orphaned Children in NJ