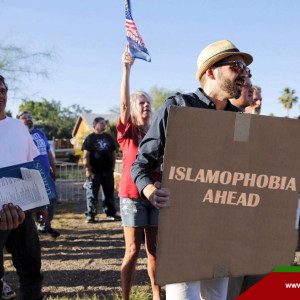 In the current election cycle, a variety of politicians have specifically called for acts of violence against Muslims and the suspension of their constitutional and human rights in the name of fighting terror. When questioned about their statements, these politicians claim that they are not being racist, because “Muslims are not a race.” But the experienced reality of Muslims who have faced suspicion from the police, discrimination at work, random violence being visited upon them by angry extremists, or the tendency of the general institutions like some journalists, Hollywood movies and television anchors to hold Muslims as a group responsible for all acts of violence committed by Muslim individuals, point toward racism as a guiding trope.

Why then, is there is such a huge resistance among the public, and even among civil rights groups to seeing anti-Muslim prejudice as a form of racism? What is the investment in the widespread refusal to see it as such? We have seen that cultural racism can proliferate once biological racism becomes politically untenable because while the latter is understood to be about ascription, culture is not. Thus, there is widespread agreement today that prejudice and discrimination against people on the basis of their biologically ascribed characteristics (race, sex, etc.) is wrong and unjust, since these characteristics are things that people are understood to have no choice over. People’s “culture” (and their religion, as a sub-set of culture), however, is not understood as an ascribed characteristic because even though people are born into particular cultural and religious traditions, nothing prevents them from leaving these and accepting new ones, or so the argument goes. In fact, it is claimed that the sign of an enlightened and liberal individual is the willingness to reject the “culture” (understood as cultural values, norms, etc.) she was born into should it come into conflict with the universal values of “human rights”. Culture and religion thus becomes cast within liberal discourse as things amenable to individual choice. And so, ironically, constitutional protections are available in the US, the land of individual freedom and choice, for “communities of ascription”, precisely because ascription implies a lack of choice.

Once religious affiliation, and thus identity, is constructed as a matter of individual choice, Muslim identity cannot be understood as a form of ascription. Given the essentialization of Muslims (and their culture) and the construction of “Islam” as the very negation of liberal values, Muslims who do not openly “reject” their culture and religion – and particularly those that appear to accept and practice it – become unsympathetic, and even legitimate targets of criticism in the eyes of many. Thus, the argument that “Islam is a religion, therefore Muslims are not a race, therefore anti-Muslim prejudice is not racism” serves to neutralize any objections against a wholesale critique of Islam and Muslims, even when that critique deploys arguments and tropes which would be unacceptable when applied to any other social group.

The appearance of new racial groups and the disappearance of old ones in the US has always been deeply connected to political and historical necessities and contingencies, a fact which Omi and Winant (1994) captured in their concept of racial formation. Defining racial formation as “the sociohistorical process by which racial categories are created, inhabited, transformed, and destroyed”, they argue that studying race involves connecting “the process of historically situated projects in which human bodies and social structures are represented and organized” to “the evolution of hegemony, the way in which society is organized and ruled.” (Omi & Winant 1994: 55). That is, understanding race was, or should be, really about understanding the ideological work done by the concept of race, and by the existence and ordering of racial categories at any given moment in time within a specific society. This ideological work of “making the links between structure and representation” is done by specific racial projects.

Racial formation within the US has always had both domestic and international aspects, with race being an integral part of both domestic as well as foreign policy. The racialization of Filipinos and Mexicans during the Spanish-American War and the internment of Japanese Americans during World War II are all examples of racial projects that corresponded to the needs of US foreign policy of that time. During the Cold War, Black radicals (and Black Muslim radicals in particular) from the 1950s to the 1970s were projected as communists. Wars are always accompanied by a dehumanization of the “Enemy”. Given the constant presence of race in the US’s social, cultural and political matrix, it is not surprising that US foreign policy and particularly US wars have always resulted in this dehumanization being played out through narratives of race, and through the processes of racialization. The enemy is thus always a racialized enemy. It is within this framework that anti-Muslim prejudice and discrimination in the US today must be approached as the latest in a long line of racial (and racist) projects.

Raza Mir is a professor of management at William Paterson University, Wayne, USA.