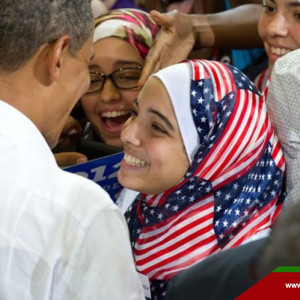 Helen Keller had said, “Optimism is the faith that leads to achievement. Nothing can be done without hope and confidence.”

A positive outlook and confidence in ourselves and others are the ingredients towards success and happiness. Truly having an optimistic view of others can bring about a prosperous society. Therefore, without a doubt, promoting peace and kindness will breed in any community mutual respect. The preaching of hate and fear will in turn create disunity and malice. Such examples can be easily illustrated. For instance, when a leader constantly speaks about fear and terror for nearly a decade, then automatically the people become apprehensive and skeptical. Trust is shattered. But in one day, another leader speaks about hope then the entire tone of the nation and world is changed.

Long before President Obama took office, he had a vision of change and when he finally addressed the masses, he advocated unity.

It seemed as if President Obama realized the ramifications of exhibiting negative behavior and speech towards any people. Therefore, the President attempted to heal the wounds that were scarred from confrontations in the past. His desire to move forward and work together based on mutual respect and interest is laudable. Islam has always been a faith that propagated good will towards one another. The Last Messenger of Islam, Prophet Muhammad emphasized, “Have a good opinion of your brothers, through that you will gain purity of heart and firmness of nature.”

Islam encourages its believers to trust each other and to assume that the intentions of others are good. It is important to think positively about others unless proven otherwise because such feelings of certitude give individuals inner peace. On the other hand, harboring pessimism tend to breed contempt in society. Imam Ali, the successor after the Prophet, instructed, “Expect good from your brothers, unless something happens that makes you rule otherwise; and do not assume a word of his is evil when there is still the possibility of it being good.”

Consequently, how we view others often reflects upon our own thoughts and feelings. A case in point can be narrated from the life of the Prophet.

When the Holy Prophet entered Medina for the first time after migrating from Mecca a man came to him and said, “O’ Messenger of God, the people of this town are men of goodness, they are kind; you have done the right thing in coming here. The Prophet told the man, “You speak the truth.”
Another man them came to the Prophet and said, Prophet of God, the people of this town are evil it would have been better if you did not migrate here. Prophet Muhammad said, “You speak the truth.” When the people heard both of the replies to both of the men, they questioned the Prophet. The Holy Messenger answered, “Each of them spoke what was in his mind; therefore, both of them spoke the truth.”

It can be surmised that thoughts evoke either positive or negative reactions Nonetheless the Islamic faith endeavors to promote solidarity by every means. False accusations or verbal hear say is not adequate enough to break loyalty or trust in any relationship. These are lesson taught by the divine leaders of Islam. A man asked Imam Hasan, the grandson of Prophet Muhammad and the second successor after him, “What is the distance between truth and falsehood?” Imam Hasan answered, “The distance between truth and falsehood is four fingers (diagonally measured from an eye to an ear). That is to say, that which is seen by the eyes is truth, that which is heard by the ears is often falsehood.”