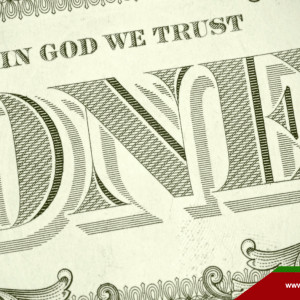 In our day-to-day dealings, we constantly exchange hands with coins and paper currency that read “In God we Trust” which is the United States official motto since 1956.

But yet, in our individual lives have we really understood this phrase and come to terms with it? In an essence, trusting God is really to submit to the Highest Power, absolutely.

When a person does so, then he or she has truly acted upon their faith.

Such was the case with Job, who is according to Quranic scripture, known as Prophet Ayyub (Job). He was a rich and faithful man. In order to test his faith, he was tried with health, wealth, and family.

Each of these was taken away from him and he continued to suffer from affliction; however, Prophet Ayyub (Job) did not waiver in God’s trust. He remained steadfast and grateful to the Almighty Lord. Consequently, due to his firm belief in God, eventually everything was returned to him and with an increase.

It is this type of faith that empowers us because despite whatever trials we face in life, it should not shake our trust in the Creator. An esteemed Islamic scholar once taught a group of teenage youths who had gone camping a powerful lesson in obtaining absolute faith in God by mere action, not just by preaching.

One night, the teenagers were served soup for dinner but they were not given spoons. They were told, “Tonight there are no spoons for your soup, sorry.” Several different reactions occurred that night from the campers; some cursed, others mocked, another complained of lack of management by the organizers stating that spoons weren’t even brought so that they could eat the soup. However, one person drank the soup from the bowl, others took out a spoon they had brought themselves. Some shared their spoon with others. Others ridiculed the ones who didn’t have spoons saying, “I brought my spoon, but you didn’t bring one.” After everyone reacted to the situation, which demonstrated their true colors, the scholar told them, “The spoons were here the entire time, behind this curtain. Certainly, we appreciate those who reacted gracefully.” After this, the spoons were distributed and everyone became quite, embarrassed of having reacted hastily.

The wishes and wants in life are all like this, they are behind the curtain. God is aware and is in possession of it, but he doesn’t give or even tests his creation in order to see their reaction, but it is there behind the curtain we just have to believe.

That night after the youths experienced the lesson of not having spoons they became all the wiser during the remainder of the camp.

The following night, when the teenagers were told that there was no food tonight, they laughed and said, “No problem.“ and left without complaint. Suddenly they learnt to become humble and submissive because of their embarrassment from the incident before.

When they were asked why they simply left without any fuss, they said, “We don’t’ want to complain again because we don’t want to be embarrassed or ashamed, if the food comes out from behind the curtain.”

Indeed, we should be active in our lives and plan, but at the same time, have trust in God. We should believe that the Almighty is there for us watching and the answers to our problems, assistance, and needs are all behind the curtain.

By the end of the camp, nothing moved the youths because they knew everything was just a test, and the organizers had everything ready, right behind the curtain.