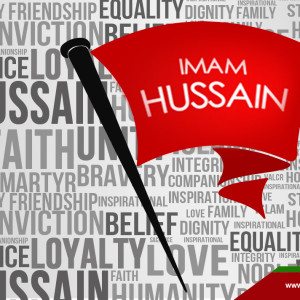 The significance of Imam Hussain’s (as) struggle is not limited just to the Shia, or even for that matter, to the Muslims. The struggle, the cause, and the principle that Imam Hussain (as) invited to was for all people, of all places, and of all times. It is this same struggle that every Prophet, from Adam, Abraham, Moses, Jesus, and Muhammad and those in between (peace upon them all) fought for. It invites people to worship the One True God, and to not create or submit to any idols of any kind. This was and continues to be the invitation of Imam Hussain (as) as he crossed the deserts of Arabia to the land of Karbala in Iraq.

Imam Hussain (as) did not limit his invitation to men.

His caravan included many women, including his own sister, Bibi Zainab (as), his own wife, the wife of the late-Imam Hasan (as), and the other women who joined the caravan. Among these women were fighters, martyrs, and messengers who became the prime source of relaying the story of Karbala.

Imam Hussain (as) did not limit his invitation to adults.

Imam Hussain (as) did not limit his invitation to the young and able.

His caravan included the aged Habib, Zohair, Burair, Jaun, and Majmaul. Jaun, the liberated by the companion Abu Dharr al Ghifari (ra) is recorded to have been 90 years old at the time.

Imam Hussain (as) did not limit his invitation to the chiefs or the slaves.

His caravan included the chiefs of many tribes and clans, such as Zohair al Qaine. Before the confrontation began, Imam Hussain (as) and his companions had set free all who were enslaved and urged them to escape and save their lives, but almost all of them remained. More than fifteen of the martyrs were such liberated slaves, who preferred death over life.

Imam Hussain (as) did not limit his invitation to even his own partisans.

His caravan even included men from his enemy’s forces who defected to the Imam’s side, welcoming certain death. One of the commanders of the enemy, Hurr, who had himself prevented Imam Hussain (as) from entering Kufa and from accessing water, realized the truth and along with some of his men joined the Imam’s side on the night before the final battle. Hurr, much like his name, chose to die ‘free.’

Imam Hussain (as) did not limit his invitation to Muslims either.

His caravan included some Christians, such as the recently wedded Wahab ibn abi Wahab and his wife and mother. It is irrelevant whether they were Muslims or Christians by the time the battle at Karbala ended, but both Wahab and his wife celebrated their honeymoon by giving their lives for this cause. In India, there are even some Hindus, calling themselves Hussaini Brahmins, who claim that one of their ancestors met with and was martyred along with the Imam (as).

What is this cause that the Imam invited everyone to? What is this event that others have sought be part of and place themselves in? Were not the idols of the Kaaba destroyed during the time of the Prophet (sawaw)? Had not Islam come to primacy in all of Arabia, and quickly spreading throughout other lands?

The tyrants, who place themselves as lords above the people, whether they be in the clothes of unbelievers, like firaun (pharaoh), or in the clothes of muslims, like Yazid, were idols of a different form. Like the unjust rulers who followed the previous Prophets and robbed the religion of meaning while claiming authority, the muslim rulers did and do the same. Just as a body without a spirit is dead, similarly the rituals of religion without the spirit, meaning and understanding are dead. The tyrants, who subjugate people to their whims and their agendas, and deny the sacredness and sanctity of humanity. The Divine breath within each of us.

An even greater danger than the tyrants, was and is the idolatry of our own nafs and its’ weaknesses. Not only the base desires of tyrants, who take themselves to be gods and become oppressors (from their own homes to positions of leadership), but the base desires of the people who allow the tyrants to oppress them. Whether they allow this due to their weakness for the luxuries, consumerisms, excuses, threats, and distractions offered by the tyrants, or due to their weakness in being afraid of resisting (in all the multiple forms) and putting at risk their property, wealth, family, lives, time, security, passivity or whatever they may cherish above the truth of their times and realities.

This being the danger, what did Imam Hussain (as) accomplish? Imam Hussain made a shahada (witnessing or testifying).

This shahada is a call to awakening. A call to resistance. A call to resistance against the tyrants over the people, the tyrant within our souls, and the weakness of our souls that prevents us from resisting. The supreme form of this resistance, as demonstrated by Imam Hussain (as) and his caravan, laid down their lives, the lives of their families, their wealth, and their own souls.

The shuhada (martyrs) at Karbala awakened the Muslim ummah (community) from its slumber. For the next 12 years, the Ummayyads were confronted with one rebellion after another. From then till now and from now till the Rise, the religious people realize that their faith cannot be manifested solely by sitting quietly in the corners of the masjid, or even by circling the Kaaba, while their bodies and souls are enslaved to oppressors and their own nafs.

Imam Hussain (as) was forced to leave Medina because Yazid offered him two choices, through his governor: Give allegiance to Yazid, or surrender. Obviously Imam Hussain (as) could not accept either. But after Karbala, Yazid did not dare to ask Bibi Zainab (as) or Imam Zayn al-Abideen (as) the same question. The situation was now different. In fact, none of the subsequent Ummayyad or Abbasid rulers had the courage to ask the same thing from the Imams of the Ahlul-Bayt (as). This and other changes in the administrations allowed the later Imams (as) to tailor the movement according to the needs of the times.

When news of Karbala reached Medina, and the people were shocked and asked why Imam Hussain (as) and his people were killed, a delegation was sent to Damascus to inquire about the situation. When the delegation returned, the leader of the delegation, Abdullah ibn Hanzalah said “Whether you rise up or not, I will make an uprising even if I have to do it alone with my sons.” Abdullah did rise up, along with his eight sons, and was martyred near Harrah. Similarly, there were the movements of Al-Mukhtar, the Tawwabun, Abdullah ibn-Zubayr, Zayd bin Ali and others against the Ummayyads, each with varying degrees of sincerity, and varying degrees of success.

It is this spirit and activity that we must inherit today. As it is said “Everyday is Ashura, Every place is Karbala” – the meaning of this is that the tyrants in the lands, and in our souls are still present. Indeed, today there are thousands of Yazids ruling over us and within us.

While there were always be central figures that will embody this invitation, the perfection of which is our Imam Mahdi (as) – May Allah Hasten his Rise – the movement is of the people.

The martyr is remembered through the relaying of the messenger.
The messenger is heard through the blood of the martyr.
The warrior shows depth of seriousness with an infant in arms.
The child shows expanse of courage with a sword too heavy to carry.
The elder is reignited through the passion of the youth.
The youth is steadied through the patience of the elder.

This is the invitation of Islam.