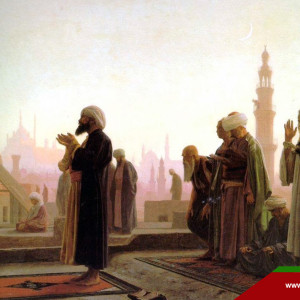 by By Paul Vallely

From coffee to cheques and the three-course meal, the Muslim world has given us many innovations that we in the West take for granted. Here are 20 of their most influential innovations:

(1) The story goes that an Arab named Khalid was tending his goats in the Kaffa region of southern Ethiopia, when he noticed his animals became livelier after eating a certain berry.

He boiled the berries to make the first coffee. Certainly the first record of the drink is of beans exported from Ethiopia to Yemen where Sufis drank it to stay awake all night to pray on special occasions. By the late 15th century it had arrived in Makkah and Turkey from where it made its way to Venice in 1645.

It was brought to England in 1650 by a Turk named Pasqua Rosee who opened the first coffee house in Lombard Street in the City of London. The Arabic “qahwa” became the Turkish “kahve” then the Italian “caffé” and then English “coffee”.

(2) The ancient Greeks thought our eyes emitted rays, like a laser, which enabled us to see. The first person to realise that light enters the eye, rather than leaving it, was the 10th-century Muslim mathematician, astronomer and physicist Ibn al-Haitham.

He invented the first pin-hole camera after noticing the way light came through a hole in window shutters. The smaller the hole, the better the picture, he worked out, and set up the first Camera Obscura (from the Arab word “qamara” for a dark or private room).

He is also credited with being the first man to shift physics from a philosophical activity to an experimental one.

(3) A form of chess was played in ancient India but the game was developed into the form we know it today in Persia. From there it spread westward to Europe — where it was introduced by the Moors in Spain in the 10th century — and eastward as far as Japan. The word “rook” comes from the Persian “rukh”, which means chariot.

(4) A thousand years before the Wright brothers, a Muslim poet, astronomer, musician and engineer named Abbas ibn Firnas made several attempts to construct a flying machine. In 852 he jumped from the minaret of the Grand Mosque in Cordoba using a loose cloak stiffened with wooden struts.

He hoped to glide like a bird. He didn’t. But the cloak slowed his fall, creating what is thought to be the first parachute, and leaving him with only minor injuries.

In 875, aged 70, having perfected a machine of silk and eagles’ feathers he tried again, jumping from a mountain. He flew to a significant height and stayed aloft for ten minutes but crashed on landing — concluding, correctly, that it was because he had not given his device a tail so it would stall on landing. Baghdad international airport and a crater on the Moon are named after him.

(5) Washing and bathing are religious requirements for Muslims, which is perhaps why they perfected the recipe for soap which we still use today. The ancient Egyptians had soap of a kind, as did the Romans who used it more as a pomade.

But it was the Arabs who combined vegetable oils with sodium hydroxide and aromatics such as thyme oil. One of the Crusaders’ most striking characteristics, to Arab nostrils, was that they did not wash.

Shampoo was introduced to England by a Muslim who opened Mahomed’s Indian Vapour Baths on Brighton seafront in 1759 and was appointed Shampooing Surgeon to Kings George IV and William IV.

(6) Distillation, the means of separating liquids through differences in their boiling points, was invented around the year 800 by Islam’s foremost scientist, Jabir ibn Hayyan, who transformed alchemy into chemistry, inventing many of the basic processes and apparatus still in use today — liquefaction, crystallisation, distillation, purification, oxidisation, evaporation and filtration.

As well as discovering sulphuric and nitric acid, he invented the alembic still, giving the world intense rosewater and other perfumes and alcoholic spirits (although drinking them forbidden, in Islam). Ibn Hayyan emphasised systematic experimentation and was the founder of modern chemistry.

(7) The crank-shaft is a device which translates rotary into linear motion and is central to much of the machinery in the modern world, not least the internal combustion engine. One of the most important mechanical inventions in the history of humankind, it was created by an ingenious Muslim engineer called al-Jazari to raise water for irrigation.

His Book of Knowledge of Ingenious Mechanical Devices (1206) shows he also invented or refined the use of valves and pistons, devised some of the first mechanical clocks driven by water and weights, and was the father of robotics. Among his 50 other inventions was the combination lock.

(8) Quilting is a method of sewing or tying two layers of cloth with a layer of insulating material in between. It is not clear whether it was invented in the Muslim world or whether it was imported there from India or China.

However, it certainly came to the West via the Crusaders. They saw it used by Saracen warriors, who wore straw-filled quilted canvas shirts instead of armour. As well as a form of protection, it proved an effective guard against the chafing of the Crusaders’ metal armour and was an effective form of insulation — so much so that it became a cottage industry back home in colder climates such as Britain and Holland.

(9) The pointed arch so characteristic of Europe’s Gothic cathedrals was an invention borrowed from Islamic architecture. It was much stronger than the rounded arch used by the Romans and Normans, thus allowing the building of bigger, higher, more complex and grander buildings.

Other borrowings from Muslim genius included ribbed vaulting, rose windows and dome-building techniques. Europe’s castles were also adapted to copy the Islamic world’s — with arrow slits, battlements, a barbican and parapets. Square towers and keeps gave way to more easily defended round ones. The architect of Henry V’s castle was a Muslim.

(10) Many modern surgical instruments are of exactly the same design as those devised in the 10th century by a Muslim surgeon called al-Zahrawi. His scalpels, bone saws, forceps, fine scissors for eye surgery and many of the 200 instruments he devised are recognisable to a modern surgeon.

It was he who discovered that catgut used for internal stitches dissolves away naturally (a discovery he made when his monkey ate his lute strings) and that it can be also used to make medicine capsules.

In the 13th century, another Muslim medic named Ibn Nafis described the circulation of the blood, 300 years before William Harvey discovered it. Muslim doctors also invented anaesthetics of opium and alcohol mixes and developed hollow needles to suck cataracts from eyes in a technique still used today.

(11) The windmill was invented in 634 for a Persian caliph and was used to grind corn and draw up water for irrigation. In the vast deserts of Arabia, when the seasonal streams ran dry, the only source of power was the wind which blew steadily from one direction for months. Mills had six or 12 sails covered in fabric or palm leaves. It was 500 years before the first windmill was seen in Europe.

(12) The technique of inoculation was not invented by Jenner and Pasteur but was devised in the Muslim world and brought to Europe from Turkey by the wife of the English ambassador to Istanbul in 1724. Children in Turkey were vaccinated with cowpox to fight the deadly smallpox at least 50 years before the West discovered it.

(13) The fountain pen was invented for the Sultan of Egypt in 953 after he demanded a pen which would not stain his hands or clothes. It held ink in a reservoir and, as with modern pens, fed ink to the nib by a combination of gravity and capillary action.

(14) The system of numbering in use all round the world is probably Indian in origin but the style of the numerals is Arabic and first appears in print in the work of the Muslim mathematicians al-Khwarizmi and al-Kindi around 825.

Algebra was named after al-Khwarizmi’s book, Al-Jabr wa-al-Muqabilah, much of whose contents are still in use. The work of Muslim maths scholars was imported into Europe 300 years later by the Italian mathematician Fibonacci.

Algorithms and much of the theory of trigonometry came from the Muslim world. And Al-Kindi’s discovery of frequency analysis rendered all the codes of the ancient world soluble and created the basis of modern cryptology.

(15) Ali ibn Nafi, known by his nickname of Ziryab (Blackbird) came from Iraq to Cordoba in the 9th century and brought with him the concept of the three-course meal — soup, followed by fish or meat, then fruit and nuts. He also introduced crystal glasses (which had been invented after experiments with rock crystal by Abbas ibn Firnas).

(16) Carpets were regarded as part of paradise by medieval Muslims, thanks to their advanced weaving techniques, new tinctures from Islamic chemistry and highly developed sense of pattern and arabesque which were the basis of Islam’s non-representational art.

In contrast, Europe’s floors were distinctly earthly, not to say earthy, until Arabian and Persian carpets were introduced. In England, as Erasmus recorded, floors were “covered in rushes, occasionally renewed, but so imperfectly that the bottom layer is left undisturbed, sometimes for 20 years, harbouring expectoration, vomiting, the leakage of dogs and men, ale droppings, scraps of fish, and other abominations not fit to be mentioned”. Carpets, unsurprisingly, caught on quickly.

(17) The modern cheque comes from the Arabic “saqq”, a written vow to pay for goods when they were delivered, to avoid money having to be transported across dangerous terrain. In the 9th century, a Muslim businessman could cash a cheque in China drawn on his bank in Baghdad.

(18) By the 9th century, many Muslim scholars took it for granted that the Earth was a sphere. The proof, said astronomer Ibn Hazm, “is that the Sun is always vertical to a particular spot on Earth”. It was 500 years before that realisation dawned on Galileo.

The calculations of Muslim astronomers were so accurate that in the 9th century they reckoned the Earth’s circumference to be 40, 253.4km — less than 200km out. Al-Idrisi took a globe depicting the world to the court of King Roger of Sicily in 1139.

(19) Though the Chinese invented saltpetre gunpowder, and used it in their fireworks, it was the Arabs who worked out that it could be purified using potassium nitrate for military use. Muslim incendiary devices terrified the Crusaders.

By the 15th century they had invented both a rocket, which they called a “self-moving and combusting egg”, and a torpedo — a self-propelled pear-shaped bomb with a spear at the front which impaled itself in enemy ships and then blew up.

(20) Medieval Europe had kitchen and herb gardens, but it was the Arabs who developed the idea of the garden as a place of beauty and meditation. The first royal pleasure gardens in Europe were opened in 11th-century Muslim Spain. Flowers which originated in Muslim gardens include the carnation and the tulip. (Courtesy: The Independent)

Previous ArticleThe Role of the Mosque at the Dawn of a New Era: It’s Justice, Not “Just Us”Next ArticleThe True, Peaceful Face of Islam