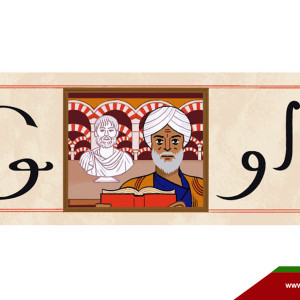 Google is celebrating the 888th birthday of Ibn Rushd with a beautiful doodle paying tribute to the famous Al Andalus Muslim polymath, known in the West by his Latinised name Averrhoës.

He was born in Cordoba, present-day Spain on April 14, 1126 and died in Marrakesh, present-day Morocco on December 10, 1198. He was interred in his family tomb at Cordoba. His works were spread over more than 20,000 pages covering a variety of different subjects.

He wrote a medical encyclopedia called Kulliyat (“Generalities”, i. e. general medicine), three books on physics and several studies on jurisprudence and law, astronomy and psychology. He furthered the tradition of Greek philosophy in the Islamic world.

Monday’s doodle on the search engine’s home page in the Middle East displays the picture of the famous scientist and philosopher with the Latin words of Google taking an Arabic-looking calligraphy shape.