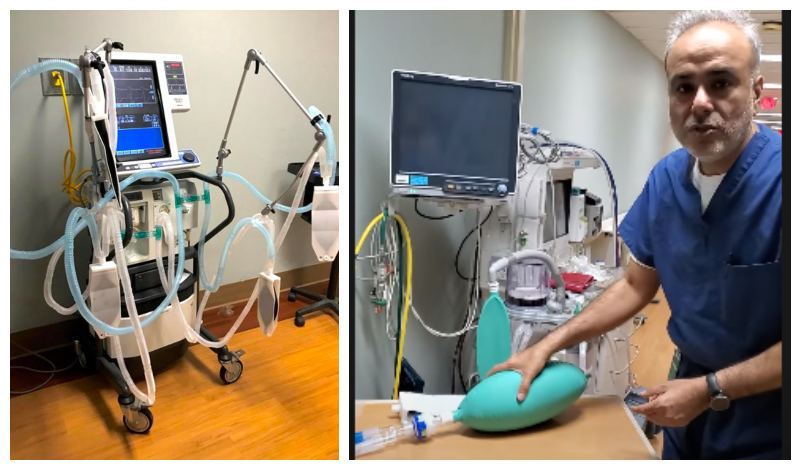 As the blessed month of Ramadhan approaches, Muslims all over the world prepare spiritually as well as physically to place delicious meals on the table for breaking fast. However, this year it is different as Muslims will not be able to congregate in mosques or in large gatherings of friends and family due to the pandemic. What is more, Muslims who have to work on the frontlines or in jobs that are considered essential will be facing more challenges as they observe the fast. Long and odd hours at work that normally would not have been due to the coronavirus, will make this Holy Month much more tasking than in past years.
One of the unsung heroes in this battle against the virus working diligently in this Holy Month is Dr. Saud Anwar. He is a Connecticut resident, a state senator, and a doctor. It is his profession as a physician that he has placed to be in the forefront of his life, as he endeavors to serve the world and he has done just that, served the world. Dr. Anwar, an American doctor of Pakistani heritage, is a pulmonary specialist in the United States. Besides making policies, he also manages patients as he confirmed doing, “…helping educate the people at various levels about strategies to manage the disease as we learn more about it,”
Furthermore, Dr. Anwar helped develop a ventilator device that makes it possible for seven patients to be treated at once. Due to the shortages of these life-saving devices, action needed to be taken. Hence, Kevin Dyer of InterPRO, a 3D printing, and manufacturing company based in Connecticut, used his network to reach out to Dr. Anwar and engineer Robert Conley, who owns Interactive Cad Solutions, about what could be done.
The team developed a “simple” splitter device that can be used on a ventilator to create “multiple branches” so that several patients can be hooked up to the machine all at once. Anwar shared information about the ventilator device on his Facebook page, including a video demonstrating how the part works.
The team also made the design information available for anyone to download. According to Dyer, the design had been downloaded about 1,000 times in more than 100 countries.
The medical and political policy arenas that Dr. Anwar has tackled has not gone unnoticed. An “unsung hero parade” of cars had driven past his home to thank the doctor for his work. “Thank you for all your heroism.” read a sign on one of the cars. Dyer agreed. “Without [Anwar’s] willingness to get involved, without him being open to the [ventilator device] idea [it] would have gone absolutely nowhere.”
For Anwar, the battle against the coronavirus is more than maximizing the usage of medical equipment for patients. It is making sure that those on the front lines have the necessary protection and equipment to fight the virus. He said, “If people have equated the current COVID pandemic with a war … then the healthcare workers, the physicians, the nurses, the respiratory therapists [and] the nurses’ aids – these are the front-line warriors. They need their protection and they need their support. And they need an investment to make sure that they are well taken care of all over the world. Because between this invisible illness and the protection of our society, it is just one force of healthcare workers standing there.”

From one doctor’s experience to another doctor’s experience in the month of Ramadhan continues to challenge. An ICU Dr. Hasan Shanawani usually works six to eight 12-hour shifts per month. During Ramadan, he usually takes the month off from working in the ICU. But this year is different. In addition to his day job at Blue Cross Blue Shield overseeing the quality of care given to Medicare patients and his tele ICU work, in which he advises ICU nurses, pharmacists, respiratory therapists, and more via video chat, Shanawani has decided to work some in-person ICU shifts during Ramadan this year.
In the U.S., Muslims over-represent in multiple fields that are considered essential during the COVID-19 crisis. In Michigan, where Shanawani lives, for example, under 3 percent of the overall population is Muslim, but Muslims account for 15 percent of the state’s doctors. In New York City, Muslims make up 9 percent of the city’s population, but 12 percent of the city’s pharmacists and 39 percent of its licensed taxi drivers.
On top of the workload that many have to do while fasting, obtaining groceries to place iftar-the meal Muslims have to break the fast at the time of sunset-is difficult. Furthermore, the daily stress of worrying whether they are exposing their family to the virus when they come home is another factor. Another added pressure is the task of maintaining physically and mentally strong while abstaining from food and water and yet, being fully functional and productive on the job.
Despite these undertakings, Shanawani will work through Ramadan, in 12-hour shifts while fasting and self-isolating from his family at home. Morally and religiously, Shanawani felt the necessity to fast and work as the need of caring for patients increased due to the pandemic as he stated, “At some point in time, you just, you can’t say no,” he said. “There are people out there drowning, [and] I know how to take care of them. How do I not step up and do that work?”
Other essential workers like janitors and grocery store employees, who are also risking their lives daily, will fast. For instance, 29-year-old Ismahan Ali will work through Ramadan without a choice. But people like her who try to further their careers in life have it even tougher. As a full-time janitor at an Amazon office at night, and a full-time nursing student during the day has the challenges to work to support her grandparents who she must take care of and cannot isolate from is an abundant amount of stress.
Her shifts at Amazon begin at 6 pm and end at 2 am. During Ramadan, after working through the night, she is up again before 4:30 am to eat suhur, the early morning meal before one begins their daily fast. But due to the coronavirus pandemic, her job now demands extra work without extra pay to sterilize the Amazon office. Chemicals used causes light-headedness which poses further difficulty in her work as Ali yearns to reach for water due to working with them, but knows during the fast she cannot.
Across the globe, Muslims are finding new challenges during this Month of Fasting due to the pandemic and the trials will increase more so for essential workers who will need to manage while abstaining from the most basic human need of food and water.