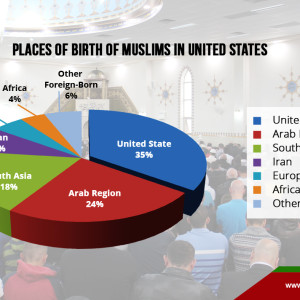 The total population of Muslims in the United States is estimated to be between 5 million and 7 million. Two-thirds (65 percent) of all U.S. Muslims were born outside the United States. They come from at least 68 countries, according to a survey by the Pew Research Center.

“No other country in the world has such diversity within its Muslim population,” said Zahid H. Bukhari of Georgetown University in Washington. “You can say that a small replica of the Muslim world is living in America.”

Arabs, Pakistanis and other South Asians make up the largest percentage of the foreign-born Muslim population in the United States.

Slightly more than one-third (35 percent) of Muslims in America are native-born. More than half of native-born Muslims are African American. African Americans constitute 20 percent of the entire U.S. Muslim population. Many are converts to Islam.

There are about 1,900 mosques in the United States, and the vast majority welcome Muslims from many different cultures and countries.

(Note: The size of the Muslim-American population is difficult to measure because the U.S. census does not track religious affiliation. The Pew Research Center conducted the first-ever nationwide, random sample of Muslim Americans in 2007, and it estimates the total number of Muslims in the United States at 2.35 million.)