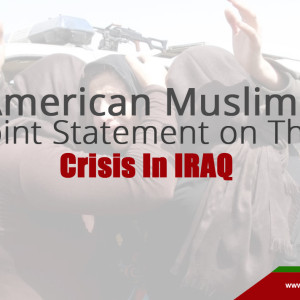 The Islamic State in Iraq and the Levant (alternatively translated as Islamic State in Iraq and Syria), abbreviated as ISIL or ISIS, is an active Jihadist terrorist group with a mission to establish an illegal unrecognized state in Iraq and Syria under the auspices the Wahhabi movement[1][i]. This week, militants from the terrorist group attacked and overran several Iraqi cities, including one of Iraq’s most populous cities Mosul. The Iraqi military failed resoundingly to combat the terrorists, resulting in a speedy conquest of the cities and the capture of Iraqi police and security forces. Hundreds of thousands of people have been displaced. Representatives of ISIL have stated an intention to attack Karbala and destroy it[1][ii]. In statements released before the attacks, ISIL declared its intention to assassinate Grand Ayatollah Sistani[1][iii].

It is an undeniable reality that Iraq is in a state of crisis, and the international community has a moral responsibility to speak out and act against ISIL whilst demanding peace and safety for the people of Iraq. We, the below signed Shia scholars, community leaders, mosques, faith communities, and activists hereby call for an immediate resolution to the crisis, and the removal of ISIL from the country of Iraq.

We condemn, in the strongest terms, the violent statements and actions of ISIL, and believe that no legitimate cause can ever be accomplished by terrorism, violence against innocents, or through sectarian hatred. We reject the narrative espoused by the leadership of ISIL, and do not accept that this crisis is a war between Sunni and Shia Muslims. Instead, we stand firmly in solidarity with the countless members of the Shia and Sunni Muslim communities who call for a better Iraq. ISIL’s strategy of intimidation, abduction, torture and murder are antithetical to the teachings of Islam, and can never be supported by any rational person.

ISIL’s leadership and members must be brought to justice. The world community must spare no effort in opposing ISIL, and restoring security to the besieged regions of Iraq, and its displaced people.

We, as American Muslims, call for Iraq’s citizenry to be granted safety and security, without the fear of aggression from terrorist elements. We reiterate our support for the peace loving people of Iraq, whether they are Shia, Sunni, or from any other religious, ethnic, or historical community. The rule of law must be preserved in Iraq, and there must be a strong focus on preserving human rights throughout all of Iraq.