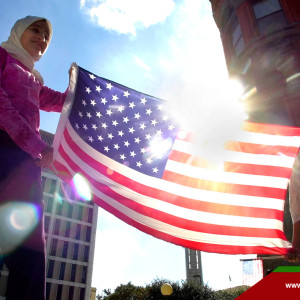 We have all heard of and condemned the recent intensification of abhorrent crimes against Muslims, and those people perceived by hate groups to be Muslims in the United States. Be it the tragic shooting of three young people in Chapel Hill in February 2015, or the act of pushing a Hindu commuter in front of a New York subway by a person wishing to “push a Muslim off the train tracks,” in December 2012, events that lead to the violent death of Muslims at the hands of ignorant haters rightly shock us. But what is perhaps far more troubling is the iceberg that these events constitute the tip of. It has been well established by several studies (e.g. Sides and Gross, 2013) that ever since September 11 2001, Muslims living in the U.S. (along with those who are perceived to be Muslims, such as non-Muslim Arabs and South Asians) have been subjected to an intensified scrutiny, increasingly viewed with fear and suspicion, and victimized through acts of discrimination and violence at the hand of both state and non-state actors. In much of the discourse about Muslims, whether critical or sympathetic, the organizing logic assumes that there is something called “Islam”, which can explain “Muslim society”, “Muslim culture”, and the “Muslim mind”. The terms circulating in this discourse are usually in the singular, implying that there is one essential, monolithic “Islam” which remains consistent across time and space, and that this particular identity accounts for the actions of all who are marked by it through their name, ancestry, national origin, ethnicity or race.

Of course, this is far from the truth. One could rightly claim that the diversity of Islamic beliefs and practices is so widespread that the greatest victims of terror committed in the name of Islam are inevitably Muslims themselves, be they the children of Peshawar’s Army public school, the Houthi worshippers of the Badr and al-Hashoosh mosques of Sanaa, or the Pashto Shias of Parachinar, all of whom fell victim to the violent excesses of ISIS, Taliban, and affiliated groups, whose religious affiliations are as questionable as their humanity.

But to return stateside, the climate of institutional Islamophobia in the US is unfortunately not a matter of individual actors doing random hate crimes. Several bills have been introduced in state legislatures and the US Congress with the intent of legislating, monitoring, and circumscribing Muslim religious practices, and six states in the country have passed red-herring bills banning sharia, a dynamic and varying set of Islamic codes that cannot, under the US Constitution, replace, supersede or displace US law (CAIR 2013). Moreover, this leads to discrimination at the workplace as well. The evidence points to increasing workplace discrimination against those who are perceived to be Muslims (e.g. Ghumman and Ryan 2013). Studies have also shown that, in the aftermath of 9/11, Muslim and Arab men working in the US experienced a significant drop in their earnings (Kaushal, Kaestner, and Reimers 2007).

It is extremely important for members of all right-thinking groups to combat Islamophobia. The strategy should be two-fold. The first is to acknowledge that Islamophobia exists as a systemic problem, not as a set of acts by random individuals. This must be articulated clearly and vociferously as a problem, without sugarcoating it. There is nothing inherently defensive or unpatriotic about calling it out, as a special form of racism (Heibling, 2012). Second, we need to ally and affiliate with groups that are predisposed to combat Islamophobia, both within the Islamic spectrum, and with like-minded non-Muslims. It is essential to be non-sectarian in our approach, which would include working for causes that are not Muslim-centric, such as gender justice, reproductive justice and anti-homophobia campaigns. This would develop our credentials as people who abhor discrimination.

CAIR (2013). ‘Legislating Fear: Islamophobia and its Impact in the United States’, http://www.cair.com/images/islamophobia/Legislating-Fear.pdf.